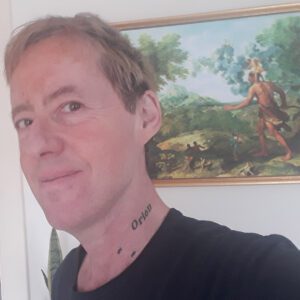 His latest book, published in April 2021, is an erotica thriller: The Hunter’s Story by Orion. A raunchy, rollercoaster ride of love, lust, longing and loss. Ancient Greek legend Orion the Mighty Hunter tells his tale of dark romance – with a stunning, shocking science-fiction finale. Adults Only.

Andy has written and lectured worldwide on terrorism, weapons of mass destruction, bombs and explosives since 2001. His first book, IRA: The Bombs and the Bullets (Irish Academic Press, 2008) is regarded as a hallmark title on the military campaign of the Irish republican movement.

Andy has also been a singer-songwriter of electro-pop music since 1982 (Oppenheimer Analysis, Oppenheimer MkII). David Bowie and Greek mythology feature strongly in all three novels.