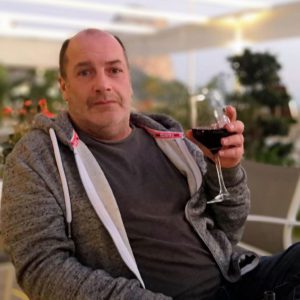 Bob Sharp lived most of his life on the West Coast of Scotland. He currently lives in Spain.

It was a dark and stormy night and he was driving home following the coastline of a rain lashed Scottish sea-loch, when he saw the sign. A crude hand painted sign that pointed into a foreboding forest, it simply said Jones Bros. And from this seed, the tale of Alfred Jones and Son Bros, was born. His debut novel.

in his time Bob has been – a dreadful fisherman, a lazy fish factory worker, a rubbish boat builder, a reluctant barman and an even more reluctant bar manager, an unenthusiastic local government administrator, a drunken student and for the last twenty years or so had run a small IT company in Argyllshire.

For the moment he is loving his Spanish lifestyle while he concentrates on his writing.