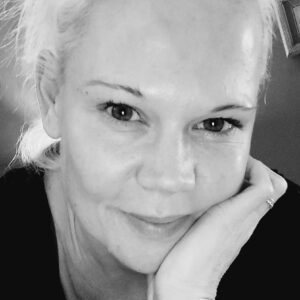 Lucy Haughey writes currently as L.W.Hawksby & is a new Author who specialises in exposing Dark Tetrad characters in her books. She is a mother of three children, three Staffies, avid gardener & cook.

Lucy has been dragged through the judicial system both as a perpetrator AND victim.

She has several qualifications, of which 3 are Diploma’s, including personality development, attachment theory, suicide intervention & domestic abuse awareness.

Before becoming an Author, Lucy had a long career in The Charity Sector & worked in solving social issues through training & public speaking.

Lucy has her 2nd book “The Notch” out & is releasing a 3rd called “The Forgivers Club”. Both books (just like her 1st book “Dangerous Normal People”) explore criminality around sexuality & addictions.

This novel is flavoured with her terrible experiences of this type of toxic marriage, catfishing, triangulation & malignant co-dependency.

Lucy is REALLY excited to be currently writing “Crazy Maker” (also known as “The Soul Searcher”) This novel is inspired by Lucy’s experiences with darkly narcissistic people in power; the people supposedly helping offenders be rehabilitated in the judicial system. She hopes this will be out in late Summer 2021.

Lucy asks that you consider any unusually harsh & personal book reviews with “a pinch of salt”. As she has experienced a female sociopathic stalker & a series of other haters, since she first exposed her domestic & sexual abuse in 2016.

The beauty of these oddballs is, they market books and draw attention to Lucy as an Author. So she thanks them from the bottom of her heart.