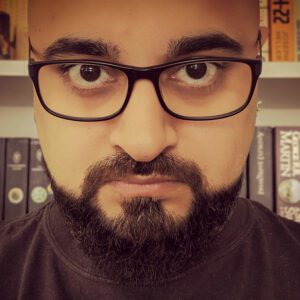 Momus Najmi is a mystery/thriller author and an occasional poet, born during the spring of 1986, in Kuwait. He lived there till the age of 15, although had to take a brief refuge abroad with his family during the Gulf War. His family later moved to Pakistan, where he lived for just over a decade. He undertook his higher education in Karachi and later an undergraduate degree in Business Administration.

He then moved to London in 2010 and undertook a postgraduate in Creative and Professional Writing from Brunel University. He always felt a disconnect with his country of birth and later residence, but came to find a visceral connection with Britain and so he decided to stay. He now lives in Essex with his Polish wife.

Momus is a secular humanist, a logophile and bibliophile with a deep appreciation for storytelling, developed from a young age. After going through various struggles in his life both internal and external, he has come to truly espouse the principles of egalitarianism, with the equality of opportunity being everyone’s fundamental right. He advocates for freedom of thought and expression, and the importance of individual rights above all. His interests include exploring the abstract realities of the human mind and its absurd existence within the wonderful peculiarities of our universe.

‘Life is filled with multitude of possibilities and we should explore as many avenues of thought as our interests can hold.’