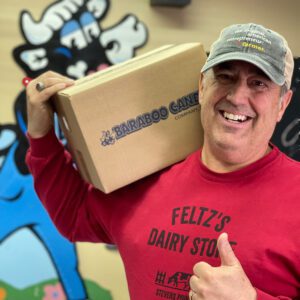 Pete Curran has a big smile. Always did.

As a kid, Pete was introspective, yet hyperactively outgoing, and now is an unlikely ‘author.’ Dyslexic, Pete became a skimmer and avoided reading.

He absorbs information and communicates visually. Neither poetry, narrative, or short story, Curran’s stories sometimes find patterns – described as soliloquies, his visual recollections are delivered as he reads – staccato … one word or phrase at a time. Slow enough for him to see the words to understand them.

His storytelling takes a look at hard lessons from rural America and how they serve as solutions for younger generations in times of chaos. As a city kid and ‘outsider’ to farming, Curran now embraces agriculture for the next generation.

In 2019, he created the first-ever Interactive Ag Career Scavenger Hunt during Wisconsin Farm Technology Days-one of the largest public events in the Midwest. The Rountree Gallery highlighted Curran’s work at its 40th-anniversary event in 2020.

There, he shared ‘a life. from dirt.’ on the struggles and successes of Wisconsin’s farmers. His storytelling began in junior high when he got his first SLR camera. Now with his iPhone and notebook, his stories grew from Facebook, When I Listened to a Farmer.

Having once rejected his father’s blue-collar roots and dirty hands, Pete now celebrates farmers while working in agriculture and sharing what he hears and sees. In America’s Dairyland. Where he wonders the value of physical work … on body and soul.