Books to knock your Sockz off 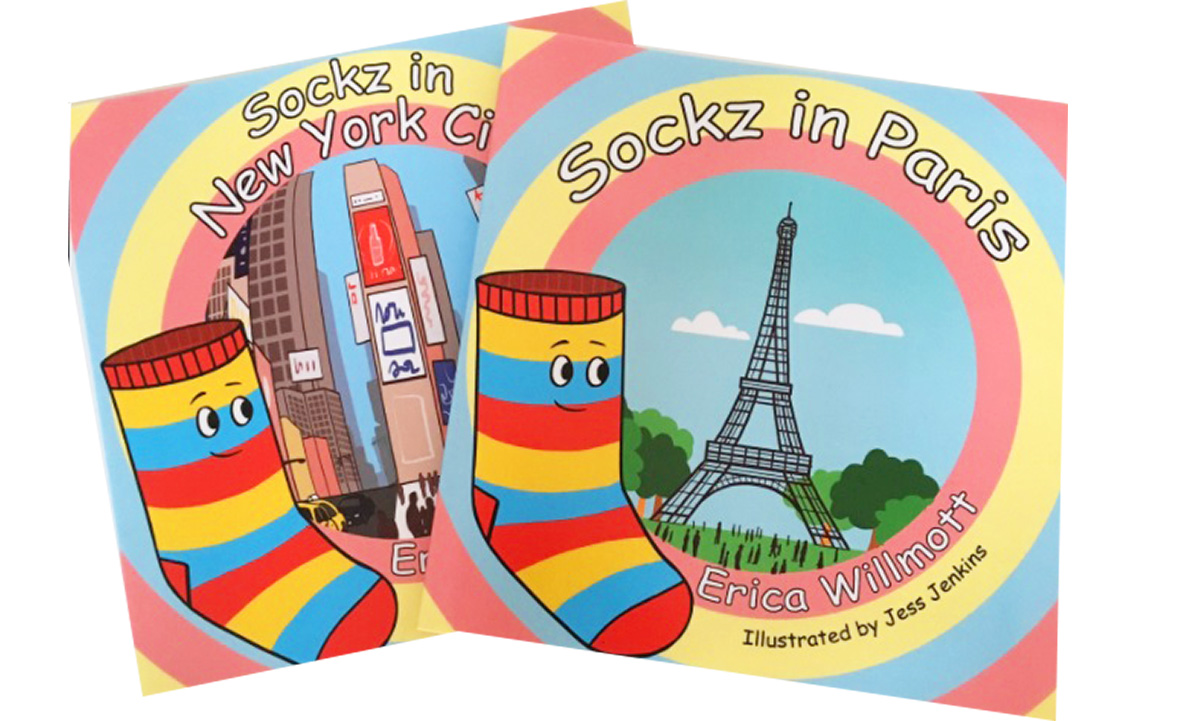 Often, the best ideas come when you’re least expecting it.

For writer Erica Willmott, it took 30 pairs of brightly-coloured socks, one uncle and one washing machine to come up with the idea for a series of fun children’s books.

“I loved to write as a youngster,” says Erica. “I loved studying English at school and I was a very big reader. I was a fan of the Sweet Valley High books and I also loved reading Enid Blyton and Roald Dahl. They always made me want to write my own stories.

A career in the world of insurance beckoned but it was Erica’s creativity that kept coming to the fore.

“I hated Maths but I had ended up working in finance. I was employed by several commercial companies and ended up working in their marketing departments, writing all their blogs. I very much honed in on my writing and I remember working out a bucket list when I was working there – on that list was ‘writing a book’.

“I’ve always been creative. I did a degree in Interior Design as a mature student as I felt that’d be a great outlet for my creativity. I found that the thing I enjoyed most was writing my dissertation.”

Erica’s eureka moment for her first children’s book was unexpected as much as it was brilliant.

“The idea of Sockz came to me several years ago when it was my uncle’s 60th birthday. I bought him 30 pairs of brightly coloured socks and not too long after, I had an email from him saying that the socks had been creating a lot of attention but that he didn’t have any matching pairs left. It was like they had gone into the washing machine and never came out. We laughed about it and said that it’d make a good idea for a children’s story.

“I came up with the idea of a main character called Sockz who gets put into the washing machine at the start of each story and ends up somewhere different each time. I sat down and wrote up a first draft and before I knew it, I had written my first book. It was set in Paris as it’s one of my favourite cities. They say that Paris is the City of Love and I wanted my main character Sockz to find his true love there! I then wrote a second one, set in New York – another of my favourite places. Here, he meets a hot dog called Henry who shows him all the sights of the city.”

Both books have been published locally and have already been earning rave reviews from both parents and their children.

“I’ve tried to make both books educational. Children can learn some French phrases in the Paris book and in the New York book, they can also discover some of the famous buildings and locations there. I love to travel and I want children to experience the wonderful world that’s out there.

“There is a third book in the pipeline. It’s a Christmas book and will be out in November. The Christmas edition is based on my love of the film Santa Claus: The Movie. I am a massive fan of Christmas. I love all the build up, excitement and magic. I wanted this to come across in my book. The great thing about Sockz is that I can place his character in any setting I want, and in any point in time. I can write books set in the past or in the future, or anywhere in the world or beyond!”

So far, the children have been more than enthusiastic about the books:

“The best judges of character are the children themselves and I have been fortunate enough to have a great response from the readings I’ve been to. If I had written five books, the children would have had me read them all. Their favourite book seems to be the New York one and their favourite scene seems to be the one where the baby penguin is born!”

The books have also been endorsed by people like cricketer Freddie Flintoff and Radio 1 DJ Charlie Sloth.

Erica has used her first-hand experience of being a parent to help market the books.

“Writing as a single mum, I’m aware that some publishers like to produce entire box sets to encourage parents to buy the entire lot. My books are different to that in that each book works perfectly well as a stand-alone book in its own right.

“I felt that self-publishing was the way to go to publish my stories. The children’s fiction market is such a large one and competition is huge. I do most of the marketing myself which is very much a learning curve for me and it’s a lot of work. Ultimately, I’d love to be able to make a living from my books.

“Going forward, I’m also looking to write some adult fiction later in the year. I have an idea that’s based on true events and it’ll be a case of doing a lot of research and working on storylines. I always carry a notebook with me in case any ideas come to me while I’m out of the house!”

There’s a lot more to come from Erica. And if you find that one of your socks has gone missing, you could find it making an appearance in one of Erica’s next books.

You can check out Erica’s books here