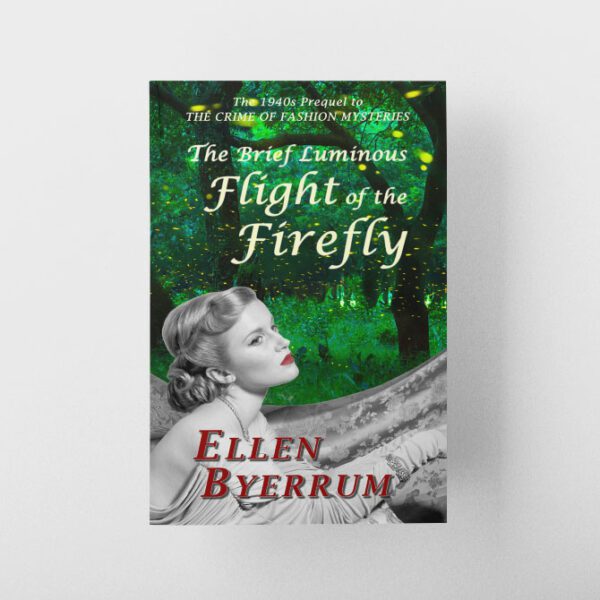 The Brief Luminous Flight of the Firefly: The 1940s Prequel to THE CRIME OF FASHION MYSTERIES

In wartime Washington, D.C., stolen sugar, illegal moonshine, ladies of the evening, and shortages of goods converge in murder.

“It’s not like it’s murder,” Mimi told her boss.

“Don’t kid yourself, sister. People commit all kinds of crimes for all kinds of reasons. There’s murder afoot whenever money is involved.”

In wartime Washington, D.C., stolen sugar, illegal moonshine, ladies of the evening, and shortages of goods converge in murder.

It’s June 1943, halfway through a World War that feels like it will never end. Rationing, victory gardens, and making do or doing without have all become a patriotic way of life. But the flip side of patriotism is hoarding, profiteering, theft, and black marketeering.

A young Mimi Smith has gone to Washington to work for the war effort. Yet Mimi’s got bigger plans than laboring as a mere stenographer at the government agency that investigates black market activity. When two “magdalens” who were selling information and stolen goods are murdered, Mimi traces a connection to a killer that no one else suspects. While others don’t care about the women who service the servicemen, Mimi can’t turn away from a promise to a friend. She teams up with a skeptical policeman and a country boy soon to enter the Navy to trap a killer that everyone has been happy to see.

The Brief Luminous Flight of the Firefly is the prequel to the bestselling Crime of Fashion Mysteries, featuring Lacey Smithsonian. Set decades before Lacey plies her trade as a journalist in D.C., Firefly explores Lacey’s Great-aunt Mimi Smith’s wartime journey that brought her to Washington, the parallels between the two women, including their love of fashion and the clues people wear without knowing it, and the origins of Mimi’s trunk full of mysteries, the trunk Lacey later inherits. And both Mimi and Lacey discover they have a passion for finding out how the story ends.

Be the first to review “The Brief Luminous Flight of the Firefly: The 1940s Prequel to THE CRIME OF FASHION MYSTERIES” Cancel reply